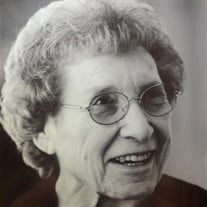 Thelma Jean Smith, 87, formerly of Celina, passed away surrounded by her family at her daughter’s home in St. Marys, on Monday August 1, 2016 at 11:53 am. She was born January 15, 1929 in Dayton, OH to Olas Francis and Rose (Dood) Powell, who both preceded her in death. Thelma married Bobby L. Smith on June 7, 1947 and he preceded her in death on June 25, 2013. Survivors include a daughter, Stacie L. (Gene) Powell, St. Marys; a daughter-in-law, Jen Eastridge, Hamilton, OH; eight grandchildren, Cliff (Joslyn) Powell, Aaron (Lyndsey) Powell, Kailie (Robb) Dugger, Ross (Codi Belcher) Weber, Travis Powell, TJ Powell, Kiersten (Jeff Brogan) Boeckman, and Randy Powell; and five great grandchildren, Jaylen Powell, Emrie Powell, Lincoln Powell, Leo Brogan, and Cruz Dugger. Also preceded in death by a daughter, Pamela K. Smith in 2015; and four brothers, Jack Powell, Glenn Powell, Olas Powell and Herman McAllister. Thelma worked her entire life as a homemaker. She was a member of the Moose Lodge, Celina. She enjoyed spending time with her family and friends and will be deeply missed by all. Memorial services will begin at Noon on Thursday, August 4, 2106 in the Cisco Funeral Home, Celina, with Rev. Jon Exman officiating; where the family will receive friends from 10 am – 12:00 pm prior to the service at the funeral home. Contributions can be made to State of the Heart Hospice, Coldwater and / or Community Health Professionals Adult Day Care Center, Celina. Condolences may be left at www.ciscofuneralhome.com

The family of Thelma Jean Smith created this Life Tributes page to make it easy to share your memories.