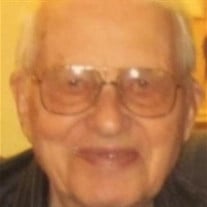 Thomas W. Smalley, 93, of Celina, Ohio passed away Wednesday, March 9, 2016 at 1:47am at Miller Place, Celina. He was born August 27, 1922 in Rockford, Ohio to Wilbur and Adah (Alspaugh) Smalley, who both preceded him in death. Survivors include five children, Ron (Jeannie Loughridge) Smalley, Celina, Steve (Beth Cook) Smalley, Celina, Glenda Smalley Smith, St. Croix V.I., Doug (Sherry Green) Smith, Rockford, and Barbara Smith (Mark) Fleck, Celina; fifteen grandchildren, Rob (Melissa) Smalley, Kelli (Matt) Jones, Aaron (Mary) Wendel, Adam Wendel, Rachel (David) Evans, Claire Smalley, Meg Smalley, Bradley, Jordan and Alex Smith, Jenny (Eric) Pugh, Matt Smith, Mark Winkeljohn, Heidi (Jay) Meyer, Ben Fleck and seventeen great-grandchildren. He married Virginia Detrick in 1949 and she passed away in 1958. In 1961, he married Fern (Myers) Smith and she passed away in July of 1996. He was also preceded in death by his two brothers, Carl "Jake" Smalley and David Smalley and two sisters, Bess Hoffhines and Carrie Sipe. Tom was a 1941 graduate of Rockford High School where he was captain of his football team. He served his country in WWII in the United States Navy 84th SeaBees Battalion. While in high school and after returning from the service he worked for his uncle's company, D.R. Smalley Construction. He also worked for many years as the Celina plant manager of Matt Schweiterman's Redi-Mix. Throughout his life, Tom pursued his love of farming and always maintained a large orchard and garden. He was a member of the Celina American Legion Post 210 and a lifetime member of the Celina VFW 5713 and helped write the charter. Tom was a devoted husband, beloved father, loving grandfather and had many friends. He will be missed by all. Visitation hours are 5:00-7:00pm Friday, March 11, 2016 at Cisco Funeral Home, Celina. Funeral services are 11:00am Saturday, March 12, 2016 at Cisco Funeral Home, with Rev. Diane Mendelson officiating. The family will receive friends from 10:00-11:00am, prior to the service. Burial will follow at Riverside Cemetery, Rockford, Ohio where military honors will be provided by the Celina American Legion Post 210 and Celina VFW Post 5713. Contributions can be made to State of the Heart Hospice, 230 W. Main Street, Coldwater OH 45828. To share memories with the family visit www.ciscofuneralhome.com.

Thomas W. Smalley, 93, of Celina, Ohio passed away Wednesday, March 9, 2016 at 1:47am at Miller Place, Celina. He was born August 27, 1922 in Rockford, Ohio to Wilbur and Adah (Alspaugh) Smalley, who both preceded him in death. Survivors... View Obituary & Service Information

The family of Thomas W Smalley created this Life Tributes page to make it easy to share your memories.

Send flowers to the Smalley family.