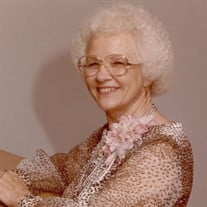 Trula Z. Randall, age 102 of Celina, Ohio, passed away at her son’s residence in Celina on August 20, 2016 at 11:23 am, surrounded by her family. She was born July 26, 1914 in Westerville, Ohio to the late Oak and Hazel (Arnold) Weaver. She married Thomas R. Randall on November 6, 1937 and he preceded her in death on July 27, 1979. She is survived by a son, Joe (Judi) Randall, Celina; a brother, Victor Weaver, Dayton, Ohio; a half-brother, James Weaver, Neptune, Ohio; 4 grandchildren, 8 great-grandchildren, and 10 great-great-grandchildren. Also preceded in death by a son Ronald T. Randall of Lubbock, TX, two brothers, William Weaver, and Edsel Weaver; and two daughter-in-law’s, Joanie Randall and Marge Randall. Trula was a 1932 graduate of Fairview High School in Dayton, OH. She worked as a bookkeeper for Lowe Brother Paint Store in Celina and for a number of years at NCR in Dayton, OH. Funeral services will begin at 5:00 pm on Friday, August 26, 2016 in the Cisco Funeral Home, Celina, with Pastor Rick Scheer officiating. The family will receive friends from 3:00 pm – 5:00 pm prior to the service at the funeral home. Private graveside services will be held on Saturday at Mercer Memory Garden in Celina. Donations can be made to Community Health Professionals in Celina and / or Living Hope Assembly of God, St. Marys, Ohio.

The family of Trula Z. Randall created this Life Tributes page to make it easy to share your memories.

Send flowers to the Randall family.