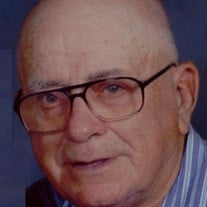 Victor “Jug” Earl Andrews, Jr., 86, Rockford, OH, passed away on September 18, 2015, at 8:15 A.M., at Van Wert Inpatient Hospice Center surrounded by his family. He was born November 3, 1928 in Elkhart, IN, to Victor Earl Sr. and Alice Beatrice (Esterline) Andrews; both preceded him in death. He married Martha Klinger on August 5, 1950; she preceded him in death on January 25, 2015. Survivors include two daughters, Carol (Robert) Berry, Rockford, and Alice (Thomas) Jackson, Celina; a brother, Roger Paul Andrews, Rockford; a sister in law, Erma Klinger, Convoy, OH; four grandchildren, Robert Jr. (Deb) Berry, Bruce (Trisha) Berry, Scott Jackson, and Kara Jackson; eight great grandchildren, Justin (Jessica) Berry, Brandon Berry, Skyy Jackson, Alexis Berry, Breanna Berry, Blake Jackson, Kaden Jackson, and Phoenix Jackson; and many nieces and nephews. He was also preceded in death by a brother, Richard Carl Andrews, at age 7. Jug was a loving father, grandfather and great grandfather. He worked for his uncle at Andrews Sawmill for over 28 years. He went on to work at the Fremont Company and retired there after 20 years of service. In 1986 he and Martha started their own Andrews Sawmill and it ran until the summer of 2014. He had many hobbies but he especially enjoyed play cards, pinochle was his favorite, bowling and watching the Reds. He faithfully attended Chattanooga United Methodist Church, where he had served as a church trustee for many years. Visitation hours will be from 2 – 4 P.M. and 6 – 8 P.M., Tuesday, September 22, 2015 in the Cisco Funeral Home, Celina. Funeral service will begin at 11:00 A.M. on Wednesday in the funeral home, with Pastor Tom Brunstrup, officiating; where the family will receive friends and family one hour prior to the service. Burial will follow at Mercer Memory Gardens, Celina, OH. Memorial contributions can be made to Chattanooga United Methodist Church. Please leave a condolence to the family @ www.ciscofuneralhome.com

The family of Victor "Jug" Earl Andrews Jr. created this Life Tributes page to make it easy to share your memories.

Send flowers to the Andrews family.