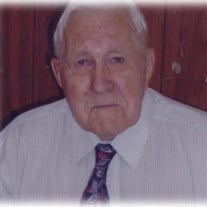 Victor G. Bergman, age 98, of Celina, Ohio, died on Saturday, October 21, 2017, at 8:50 pm in The Gardens of Celina, where he resided for one week. He was born July 25, 1919 in St. Rose, Ohio to the late John T. and Bernadina (Knuefner) Bergman. On September 23, 1950 he married Helen (Borger) Bergman in the Immaculate Conception Catholic Church, Celina, Ohio, who survives with a number of nieces and nephews. Also preceded in death by his siblings, Elizabeth (Benedict) Keller, Aloys Bergman, Clarence Bergman, Rosemary (Norbert) Brunswick, Norbert (Viola) Bergman and Rosalinda (Norbert) Siefring; his father and mother-in-law, Farry and Cecelia (Schmalstig) Borger; sisters and brothers-in-law, Gerald (Elizabeth) Borger, Alfred (Dorothy) Borger, Roselyn Birkmeyer, and Elmer Borger who died in infancy. Other survivors include sisters and brothers-in-law, Louis (Beatrice) Borger, St. Marys, Mildred (Louis) Homan, Dayton, Lucille (Urban) Berning, Maria Stein, and John Birkmeyer, Celina. Victor was a 1939 graduate of Minster High School. He served his country in the United States Air Force during the WWII era, where he was a bombardier on the B24 plane. He retired as a farmer and a bookkeeper for the Ohio Department of Transportation in Mercer County after 22 years of service. He was member of Immaculate Conception Catholic Church, Celina, Knights of Columbus, Celina, Maria Stein American Legion 571, as past commander and county commander, Mercer County Ohio Genealogy Society, and Mercer County Historical Society. Victor enjoyed traveling throughout the United States and European Countries. He also loved working on genealogy and spending time with his family and friends. Visitation hours will be from 3 - 8 pm, Tuesday, October 24, 2017 in the Cisco Funeral Home, Celina, OH; where a Knights of Columbus prayer service will be conducted at the conclusion of the visitation. Mass of Christian burial and the celebration of his life will begin at 10:30 A.M. on Wednesday October 25, 2017, in the Immaculate Conception Catholic Church, Celina, with Fr. Kenneth Schnipke, C.PP.S., officiating. The family will receive friends on Wednesday, from 9:00 A.M. – 10:00 A.M at Cisco Funeral Home, Celina. Burial will follow at St. Marys Catholic Cemetery, Celina, with military honors by Maria Stein American Legion Post #571. In lieu of flowers please donate to the School Endowment Fund at Immaculate Conception Church and/or to a charity of the donor’s choice. Please leave a condolence to the family @ www.ciscofuneralhome.com

The family of Victor G. Bergman created this Life Tributes page to make it easy to share your memories.

Send flowers to the Bergman family.