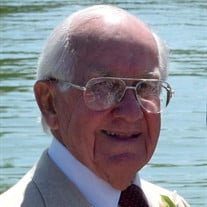 William (Bill) M. West, Jr. of Celina, Ohio passed away peacefully on October 3rd, 2020 at a young age of 98. Mr. West was born in Baltimore, Maryland to William M. Sr. and Edna West on July 16, 1922. He resided in Coldwater and Celina Ohio since 2017, the last year and a half living with his daughter Carol and son-in-law John Szanto. He graduated from the Baltimore City College in 1940. He then worked for Crown Cork & Seal Co. and the Davison Chemical Corp. before joining the Army Air Corps in 1942. During World War II, he received his commission and wings from San Marcos, Texas Navigation School, Class of 44-4. He continued training at Roswell, New Mexico, obtaining Bombardier’s wings, thus becoming “Dual” rated. He subsequently served with the Tenth Air Force in the China-Burma-India Theater as Navigator/Bombardier & Co-Pilot on B-25’s and C-47’s with the North Burma Air Task Force attached to O.S.S. He was awarded the Air Medal with oak leaf cluster for his combat missions & flights over the Hump. Likewise, he was the Navigator on many and various military flights throughout the world. After WWII, he graduated from the University of Baltimore with a certificate in Accounting. Mr. West then worked for General Motors Acceptance Corp. as Accounting Manager in branch offices in Baltimore, Maryland and Washington, DC and as Manager of Computer Centers in Detroit, Michigan and Dayton, Ohio. While at the Dayton Computer Center, he was instrumental in the design and implementation of a nationwide telecommunication computer system, the first of its kind in 1970. He retired after 33 years of service with GMAC. In civilian life he obtained his Private Pilot’s license in 1974 and enjoyed flying as Pilot-in-command around the U.S.A. in his Cessna Skyhawk for more than twenty-five years. In retirement, besides flying, he enjoyed boating aboard his Westar I, II and III boats and his various Sea Doo jet-skis. He served in the James City Virginia High School system teaching in areas of math, accounting and technology education. He was a charter member organizing the Williamsburg Virginia Powhatan Shores Homeowner’s Association and was its President/Treasurer for many years. He was also a member of the China-Burma-India Veterans Association, the Humps Pilot’s Association, the Air Force Navigator’s Association, the United Flying Octogenarians, and the American Legion. In 1999, with his wife’s editing and his daughter Carol typing, he authored a book titled “Daddy What Did You Do During The War” detailing his life in the Army Air Corps in Burma during WWII, which is on file at local libraries and the Library of Congress. Mr. West was preceded in death by his sweetheart forever wife of 69 years Joy Every West. Joy became a WWII war bride, and as a newlywed couple, they enjoyed the adventures of military life together until Bill went overseas. He took great care of his wife, Joy, when she became ill with Alzheimer’s until she passed away on September 6, 2013. He is survived by one son, Barry (Angie) West of Del Rio, Texas, two daughters, Gail (Tony) Zeolla of Redford, Michigan and Carol (John) Szanto of Celina, Ohio and numerous grandchildren and great-grandchildren. He was a beloved member of the community with an outgoing personality, and had an affinity for people and knew every neighbor’s dog by name. He was a strong willed man who loved life, living each day to the fullest. His favorite singer was Frank Sinatra, and his favorite song was also his moto in life.. “I Did It All, And I Did It My Way”. He will be deeply missed by all that knew him. Attendees are asked to follow social distancing and guidelines dictated by the Ohio Department of Health, due to the National Health Concerns of Covid-19. Masks are required by Attendees at the visitation and funeral. Visitation hours will be from 12:00 pm – 2:00 pm, Friday, October 9, 2020 in the Cisco Funeral Home, Celina. Funeral services will follow at 2:00 pm in the funeral home with Rev. Matt Overman officiating; with military rites to be conducted by Celina American Legion Post #210 and VFW Post #5713. In lieu of flowers, memorial donations may be made to the Cure Alzheimer’s Fund Cisco Funeral Homes are honored to care for Bill and his family. To pay your respects or leave online condolences or memories, visit www.ciscofuneralhome.com or visit Cisco Funeral Home Facebook page.

William (Bill) M. West, Jr. of Celina, Ohio passed away peacefully on October 3rd, 2020 at a young age of 98. Mr. West was born in Baltimore, Maryland to William M. Sr. and Edna West on July 16, 1922. He resided in Coldwater and Celina Ohio... View Obituary & Service Information

The family of William "Bill" M. West Jr. created this Life Tributes page to make it easy to share your memories.

Send flowers to the West family.